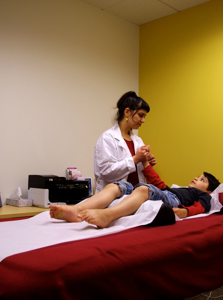 Elham was born in Tehran, Iran and moved to the United States in 1979. She settled in Clovis, California with her family and started a new life as a teenager in a strange new land. She went on to graduate from CSU Fresno with a BA and Teaching Credential in Art and became a high school teacher in Fresno. She moved to the Bay Area in 2000 being drawn by the energy and excitement of San Francisco. She worked as an art teacher at Balboa High school of San Francisco Unified, teaching ceramics, drawing, painting and printmaking. In 2002, after 11 years of teaching she decided it was time for a new challenge.

In her spare time she enjoyed gardening and read a book about Chinese Medicine that used a metaphorical vehicle comparing this system of healing to gardening. She felt she had found a new calling and that it was a natural progression considering that the Latin root of the word doctor means “teacher”.

She went back to school to get her Masters in Traditional Chinese Medicine and while in school she gave birth to her son and balanced her time between mothering and studies.

She completed internships at California Pacific Medical Center hospital in San Francisco in the stroke and spinal cord injury clinic as well as the Haight Ashbury Free Clinic working with AIDS and hepatitis patients. Upon graduation she did a residency under Lifang Liang O.M.D, Ph.D., L. Ac. in San Francisco concentrating on women’s endocrinology and fertility.

Elham practices martial arts and is currently a Red Belt in Kuk Sool Won. She also enjoys hiking regularly and looking for waterfalls during the rainy season.

VISIT OUR STATE OF THE ART OFFICE

REQUEST YOUR NEXT VISIT TODAY!

Accessibility by WAH
Call Us Text Us